The CoPilot routing algorithm looks for the “best” path between two points. However, “best” is subjective—it depends on a user selecting the Routing Type and Vehicle Routing Profile that fit his or her business needs.

We use the general term “stop” to describe all defined locations in a trip itinerary, avoiding terms like “origin” or “destination” which have a wide range of common uses.

In addition to stops, you can also set Waypoints for a route. Waypoints can be used to modify the route path to pass through a specified point, without acting as a full stop.

The Ways Stops are Entered into CoPilot

There are many ways to define stops in CoPilot, including: 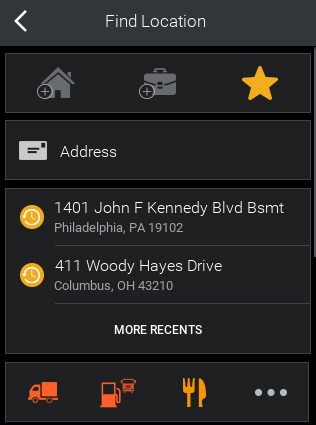 Most methods of entering stops result in a stop point that is technically not on the road network—for example, entering the latitude/longitude of a building. Therefore, CoPilot takes an additional step to create a “routable point” for that stop.

The most common process of creating a routable point for the stop involves our snapping logic. (We “snap” the stop point to the nearest routable road link.) This is why we sometimes refer to the routable point as the “snap point.”

Essentially this creates two points for every stop on a trip: 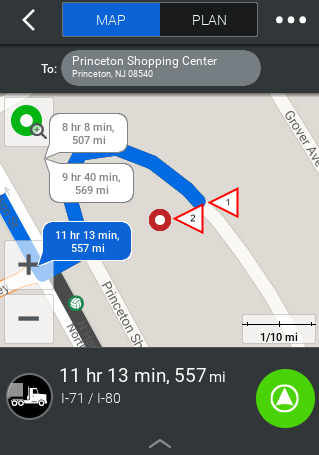 For this route, No. 1 is the routable point, and No. 2 is the stop point that was entered into CoPilot.

When the routing algorithm creates a path between two routable points, this is called a “leg.” Trip plans may consist of only one leg—the Current Location to Stop 1—or multiple legs.

Other Factors that Impact Routing

In addition to the Route Type and Vehicle Routing Profile, other factors that can impact how CoPilot routes, include: